TODAY IN FILIPINO HISTORY — 2 December 1899: The Battle of Tirad Pass took place, almost wiping out all the troops under General Gregorio del Pilar who himself perished in the said battle. Eight out of sixty Filipinos survived the ordeal while only two out of more than three hundred US WASP invaders were killed in the lopsided battle.

One of General Goyo’s men saw him killed instantly by a sniper’s bullet — but that was due to his carelessness!

“If the ancient Greeks had their valiant King Leonidas and the Battle of Thermopylae, Filipinos have their General Gregorio del Pilar and the Battle of Tirad Pass,” wrote historian Jesús C. Guzon in the book “Eminent Filipinos” published by the National Historical Commission (now the National Historical Commission of the Philippines) in 1965. But with regard to his comparison of King Leonidas to the boy general, National Artist for Literature and historian extraordinaire Nick Joaquín wrote the following in his controversial “A Question of Heroes“:

“The wrong thing to do about Tirad Pass is invoke Leonidas and Thermopylae, because we would be invoking to our hurt another people fatally flawed with the inability to unite and organize. Besides, the parallel with Leonidas, king of the Spartans, is neither exact nor flattering: it was not Aguinaldo who fell at Tirad. Moreover, the annals of war show that in mountain warfare, especially in actions on a mountain pass, the advantage is with the defender, not the invader, and victory must be expected from the defender.”

“But Tirad Pass was taken in six hours.

“There were, you will say, only 60 men to defend it. Precisely. And that was the stupidity. Our improvidence always forces us in the end to improvise, when it’s too late even to improvise. We will not plan ahead, we will just muddle through, and then at the last hour we send men to die for our blunders, our lack of foresight. If there were any justice, it’s Aguinaldo, it’s Mabini, who should have perished on Tirad. But so that Aguinaldo can flee in futile flight, 60 men are sent to pay with their lives for the monstrous botch he has made of the Revolution. And now we read Tirad as a symbol of heroism, not stupidity.

“A few more Tirads and we’ll be the most heroic people in extinction.”

Tirad Pass: Thermopylae it is not.

And according to the diary of Telésforo Carrasco, a Spaniard enlisted in President Emilio Aguinaldo’s runaway army, the boy general, who in stories was said to have died heroically and fighting to the last bullet, died due to his own carelessness:

“At dawn we saw the enemy climbing the slope and moments later the firing began in the first entrenchment, which was under Lieutenant Braulio. At around nine in the morning two Igorots climbed to the peak and told the general that the Americans had suffered losses at the first entrenchment and could not advance. Heartened by the news, the general decided that we were to descend in his company and take part in the combat.

“This we did and an hour later found ourselves where nine soldiers were defending the left flank of the mountain in the second entrenchment. Hardly had we got there when we saw the Americans climbing up, only fifteen meters away, whereupon the soldiers started firing again.

“The general could not see the enemy because of the cogon grass and he ordered a halt to the firing. At that moment I was handling him a carbine and warning him that the Americans were directing their fire at him and that he should crouch down because his life was in danger — and that moment he was hit by a bullet in the neck that caused instant death.”

But this stupidity described by Nick was just the tip of the iceberg. He went on to say that Goyo del Pilar was actually one of Aguinaldo’s high-ranking hatchetmen. Murdered under General Goyo’s helm were the allies of the fallen General Antonio Luna such as the Bernal Brothers (Manuel and José). And some of Luna’s staff were harassed, tortured, and ordered arrested.

I wonder most of the time what the word heroism really means in this country. Marami tayong mga bayani na hindí namán dapat tinítiñgalà. What should be the attributes of a true national hero? But to be fair, while it can be said that Goyo del Pilar started out as villainous —if the hatchetman tag was indeed true—, we might as well still regard him as a hero for standing his ground against the US WASP invaders, even if the circumstances surrounding his death and his army’s loss were limned with “stupidity” (to borrow Nick’s description).

As an ardent observer of Filipino History, there is one shocking fact that I have learned: countless villains in this country are regarded as heroes, and the integrity of the true heroes of the nation is perpetually besmirched. This will not stop until we have freed ourselves from the fetters of neocolonialism and the blind Hispanophobic rage that we have against our glorious past. 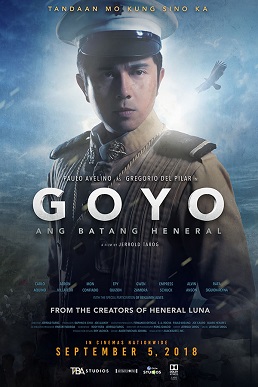