You wake up to the sound of cocks crowing. You get up to open your cápiz shell windows, sliding each pane with both arms to either side, to welcome a cold, misty morning. Last night’s surviving stars are fading fast in the purplish sky. The sun is barely up, but you can already see its soft, glowing rays from afar, breaking unevenly from right behind those green hills, disturbing the darkness of dawn. The sweet smell of earth and grass, still wet with dew, welcomes your nostrils that were put to sleep by the scent of last night’s camia, ylang-ylang, and other sweet-smelling night flowers from your grandmother’s garden. The nearby brook splashing its waters through rocks and pebbles suddenly becomes audible, its xylpohonic merriment complementing the gradual spreading of light. You shiver with delight as fruit trees from outside the house rustle with the cool morning breeze.
Grandmother, who has just finished her morning Rosary ritual, is already frying garlic rice and beef tapa for breakfast. While waiting for the other family members to wake up, you just stand by your window watching the glowing rays of the morning sun creeping lazily through the greens of the field where your grandfather is already tugging his faithful carabao for the day’s toil as the bells from the town church begin to peal.
A chirp from a nearby tree was followed by another. And then another. All of a sudden, a hundred chirping sounds started to burst from the branches to join the chorus of the breaking dawn.
You just stand there and take it all in. Because you don’t want it to end. You don’t want it to end…
* * * * * * *
This is a classic Filipino morning scene that many of today’s youth sorely miss out. Today, we all wake up to the horrid sound of tricycles and jeepneys, and the infernal buzz of the alarm. 😞

It was a weird morning. As our bus entered La Laguna, the sun was all up and bright. The next minute, it rained so hard as if all heaven had poured out whatever Greg Martín “Gretchen” Diez had been hoarding up in his bladder for well over a month.

The unexpected downpour happened in an instant, at the exact moment that I was alighting from the bus on my way home. Tough luck. My wife and kids forgot to put the umbrella in my backpack.

So there I was, stuck in a narrow sidewalk with very minimal cover from the rain. Good thing I had my mobile phone with me, with a playlist to accompany me in my boredom.

When the rains gradually decreased to a drizzle, I saw them: the ever-familiar yellow truck with its pile of bagged filth and near-robotic collectors handling them, stuck in rain-drenched traffic, but still on the go, picking up garbage bags from stores along the busy national road. I just had to take their photos.

Even at this godforsaken weather, they are working, unmindful of the cold and rain. What made their situation worse was that they are soaked on top of a pile of muck, grime, dead cats crushed by vehicles, a little excrement here and there, and all the other disgusting things you can think of inside a garbage truck. But a job’s a job.

Out of that measly salary, they will have to set aside money for medications for various illnesses contracted from their filthy job — that is, of course, if they don’t ignore them (many of them do because medication is as expensive as food). In case they don’t, then that is an additional burden for them, considering that they had to buy meals for their families, pay for the schooling of their children (it is a myth that public school students need not shell out money to go through schoolhood), pay for rent, and many other expenses. If we middle-class income earners are continuously complaining about rising prices of commodities, oil price hikes, and other cost of living expenses, have you even stopped for a brief moment to think what kind of life these hapless people who collect your daily waste have? Most of them live in dilapidated areas, in shanties standing on land they don’t even own, or along polluted rivers that overflow during heavy rain. And they don’t have job security since many of them are only given “job order” designations by their respective LGU employers.

If you think eating out in Jollibee is already corny, for them feasting on Burger Machine on Christmas Day is an experience.

They have one of the most difficult jobs in the world — who would even want to pick up garbage collecting as a career? Not even them. But due to uncontrollable circumstances in their lives, they had no other choice. Yet our government treats them lowly. If they have the most difficult job in the world, why pay them minimum? In all seriousness, they had to be paid more than double their monthly wage. Or even higher than that. And with more benefits. Without them, our daily routine would be paralyzed.

Remember the Great Pacific garbage patch, the North Atlantic garbage patch, and many other humongous marine debris sprouting in many oceans in our planet? They have been in the news lately, and they would have been bigger and disgustingly plentiful if not for these unsung heroes who, rain or shine, regularly pick up your generally unsegregated waste. Yes, unsung heroes, because that’s what they really are. How many of you are even willing to dispose of your own waste just to keep your homes and your neighborhood spic and span?

(We may also add that that they are accidental unsung heroes, for they didn’t want to be garbage collectors in the first place).

That is why it is infuriating to note how our top government officials waste too much time on attention-seeking individuals like Mr. Diez when more sectors of society are in dire need of assistance. Garbage collection and disposal is fast becoming a world epidemic, a plague that is almost rarely discussed nor prioritized as evidenced by those aforementioned growing garbage patches across the seas.

It is high time we honor these unsung heroes and give them the due recognition that they deserve.

Come to think of it, when was the last time you heard that a garbage collector was awarded by their national government?

This is my brief commentary on Senate Bill 2134 being put forward by Senator Risa Hontiveros.

A VOW is a VOW no matter what. If you PROMISED to be true to your spouse in good times and in bad, and you PROMISED to love and honor him/her all the days of your life, to have and to hold, for better or for worse, for richer for poorer, in sickness and in health, until death parts you both, then do it. Honor it. Live up to it. No matter what it takes. You will fall and stumble from time to time, that is expected. But never falter. Holding steadfast to a promise is not only for the benefit of your partner nor for your marriage’s sake but also for yourself. Don’t trifle with a VOW. Because if you do, then all the more easier for you to make feeble all your commitments. What will make you trustworthy in the future? 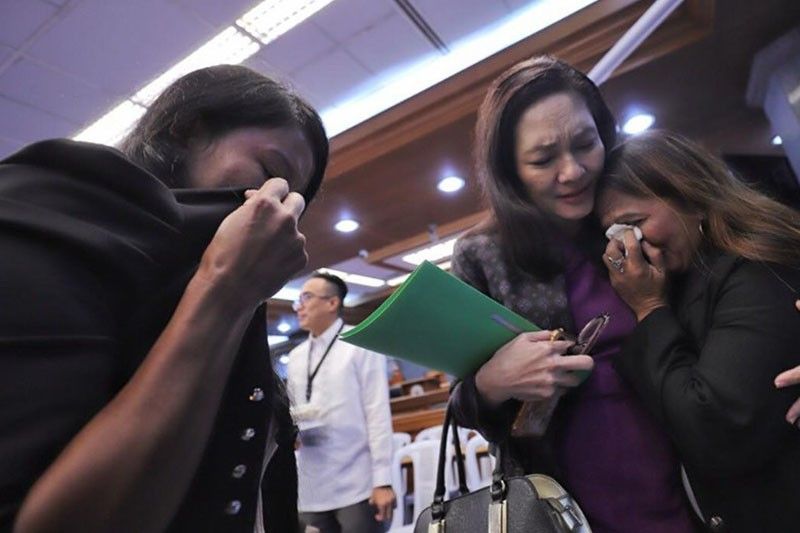 Did you know? The 164-year-old “Iglesia de Santa María Magdalena” in Magdalena, La Laguna is famous for being the favorite filming location of the late, great Fernando Poe Jr. In fact, he made a movie there together with my dad’s cousin, beauty queen Marilou Destreza (you may watch their movie Sanctuario right here). Many other movie outfits also had their period films shot there due to the town’s vintage look. Remember the sleeper hit Heneral Luna? Antonio Luna‘s death scene was filmed there.

My wife Yeyette at the entrance to the church. The church door itself is almost two storeys high.

But wait! There’s more! This is also the church where Katipunero rebel Emilio Jacinto sought refuge when he was wounded in battle (his blood stains are even preserved on the spot where he had hid, encased in glass).

But wait! There’s even more! The priest who supervised the final years of this baroque church’s construction was Fr. José Urbina de Esparragosa, a Spanish friar who was said to be the “abuelo” of almost all the original residents of Baler, Tayabas (now part of Aurora Province)! But wait! There’s even a lot more! Did you know that Fr. Urbina was the grandfather of a famous politician?
The politician that I speak of is none other than Manuel L. Quezon. 😉
I found this textual meme in the Facebook group Oficialización del Español en Filipinas (Officialization of the Spanish Language in Filipinas). It compares the various inflections of the English verb do to that of its Spanish counterpart hacer. As you can see, the verb forms in English are not as numerously expressive compared to their Spanish versions.

This is just one example why learning English is a piece of cake among native Spanish speakers. Picture this…
José Rizal, a native Spanish speaker, taught himself English. And he aced it.
Manuel L. Quezon, a native Spanish speaker, learned English in only about three weeks. He learned it on a steamship while traveling to the United States for the first time.
Claro M. Recto, a native Spanish speaker, mastered English in only three months.
The first Filipino short-story in the English language was written by a native Spanish speaker, Paz Márquez de Benítez of Lucena, Tayabas (where I was also born). That story, “Dead Stars”, was composed during the early years of US occupation. And when you read her story, its masterful language will make you stop and think how today’s Filipino fiction in English pales in comparison to hers. And to think that we’ve been learning English for more than a century while the English of Benítez’s era was still quite young.
José García Villa, our first National Artist in Literature who is also considered as one of the finest (if not indeed the finest) our country has ever produced when it comes to poetry, was another native Spanish speaker. He was highly acclaimed by critics not just here but also those in the United States.
And of course, there’s the one and only Nick Joaquín, the greatest Filipino writer in the English language, hands down. And, you guessed it, he was also a native Spanish speaker. A fact not known to many.
Why is this so? Because Spanish and English are both cognates. They have so many words that are similar or even identical. In layman’s terms, Spanish and English are “cousins”.
It is no wonder why our grandparents and great grandparents who received good education during the US occupation of our country spoke and wrote better English than us. And that is also why most of our literary greats in the English language (Joaquín, Villa, N.V.M. González, Trinidad Tarrosa, Paz M. Latorena, etc.) usually come from that epoch when Spanish was still the language.
Had we allowed the teaching of the Spanish language to continue in our curriculum, and had our government supported its usage, we would all be writing and speaking English much better than our North Américan invaders.
Follow EL FILIPINISMO on WordPress.com