I was with Mayor Calixto Catáquiz yesterday. Well, he’s no longer mayor here in our place (his wife is), but we still call him Mayor. Anyway, that’s how it is here in Filipinas: you address ex-politicians by their former designations.

I showed to him the final chapter that I added for his biography. He assigned it to me last April, but I only got to finish it yesterday. It was only four pages. For a span of four months, I only got to write four pages! That’s how horrible my state of mind has become. I’ve been battling a lot of personal issues lately, both health and mental. I’m always vocal on my regional pain complex syndrome, but not on my depression-induced writer’s block. Depression, I think, has become too stale a word these past few years. So many people on social media have been confessing that they are suffering from depression that I suspect many of them are only fishing for sympathy.

Anyway, enough about me. Going back to the biography (hey, that rhymes!). It’s been more than 10 years since I started it with Arnold — my golly, more than a decade, and it’s not yet even finished! Even Arnold gave up on it already and left the whole project to my sole care (he has since been holed up in Singapore, together with his family). Why the horrible delay? Aside from the above-mentioned personal troubles, one contributor to the delay is that each time I’m done with the biography, Mayor Calex wanted to add more to his personal timeline. Understandable. A politician’s life, after all, is dynamic, even after his career is over. And his is no ordinary career as he was not spared from controversy. Other than that, my abnormal schedule (coupled with an inhumane daily commute) doesn’t permit me to live the full life of a writer-researcher, thus adding up to my depressive state.

Anyways, yesterday I received good news from him. We were in one of his vans, and he was on his way to one of his meetings (he is still active after retirement, acting in behalf of his wife). It was there where he scrutinized what I wrote for him. After reading the additional chapter, I saw that he was very pleased with it. In fact, I think it was the happiest that I saw him with regard to his biography (I guess the four-month delay paid off well). He then told me that he wishes to see his biography published by next year. Finally.

We then proceeded to nearby Biñán to visit a car repair shop. He wished to show me something: two vintage cars that he had bought from friends. The first one he showed me was a 1957 Chevrolet, bought about a decade ago, and for a bargain: ₱100,000. The parts had to be purchased in the US since there are no service centers here for the said model. 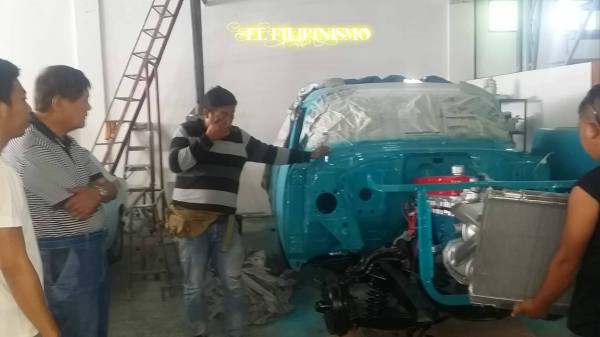 Mayor Calex, second from left, checking the progress of his vintage Chevy that was bought from a friend.

The second one he showed me was a 1969 Ford Mustang, also bought a couple of years ago. The original owner was actually former Parañaque Mayor Pablo Olivárez (he was the mayor when I was still a skinny little runt living in the said city). This car cost him only ₱10,000 since the last owner had to migrate to the US and was raring to dispose of it the soonest. 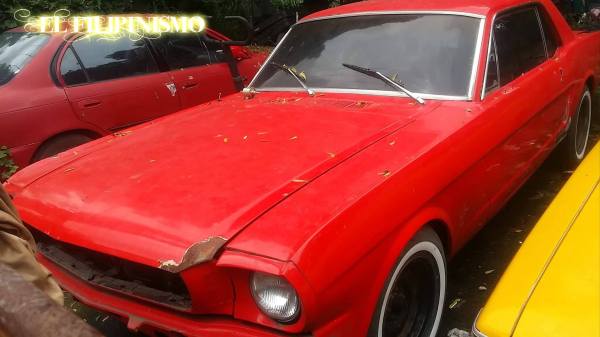 The original cost of these cars, of course, was equivalent to that of a fully-furnished house big enough for a family such as mine. While the value of a car immediately goes down once it leaves the car shop, these two vintage cars should still be pricey enough because of their prestige. One might say that Mayor Calex really got lucky with the price that he had to pay for these two, and he will readily agree to such observation.

Nevertheless, these cars are already costing him aplenty during the rehabilitation process since the spare parts had to be purchased from the US. But he’s a well-heeled fellow, anyway, even before politics invaded his privacy (he never intended to run for public office, but hey, I’m going ahead of his unpublished biography). Collecting vintage cars has been his hobby. His first car was a 1968 AMC Javelin, a gift from his parents. Although it was a gift, the Javelin wasn’t exactly fully paid when it was given to him. Straight out of graduation, young Calex had to work in one of his parents’ business firms so that he could continue paying for the car’s monthly amortization; he had to shell out ₱5,000 from his ₱10,000-per-month salary. This event proved that young Calex was already being trained by his parents to be self-sufficient, to be able to fend for himself, and to be able to prove that whatever he gets in life, he must prove himself worthy of it. 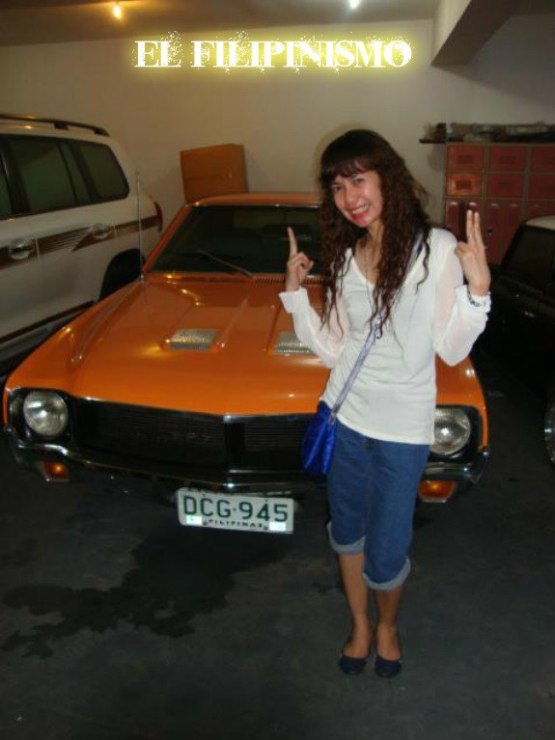 My wife Yeyette posing in front of Mayor Calex’s prized Javelin. The car still runs to this day and is used only during special occasions. This photo was taken six years ago.

All that training that he got from his parents was all worth it because he can now afford all the vintage cars that he wants, especially now that he’s retired from politics. He told me that he wants to make it his hobby from now on. It’s what he has always wanted to do in the first place, politics just kept him away from it. He confided that he had to maintain a hobby to keep his mind off all kinds of stress, especially at his age (he’s turning 71 this December). And he’s diabetic, too.

Going back to the van after checking those two cars, we then started talking about health problems, and how stress factored in them. I relayed to him that one of the main reasons why I contracted pneumonia and tuberculosis more than a year ago was because of stress (coupled with lack of sleep and missed meals). Too much stress weakens the immune system. And when that happens, you know what comes next: the bugs will start attacking you.

He then told me that he’d been to Unisan recently (his late father and my father are from there) to attend the wake of the wife of that town’s former mayor who had died of cirrhosis of the liver (the ex-mayor is his friend and political ally; ironically, that same ex-mayor is my dad’s rival). The wife was also diabetic, said Mayor Calex. He was a bit puzzled as to why Unisan’s former first lady succumbed to a disease that is often attributed to too much liquor. She didn’t even have any vice, he wondered. I surmised that maybe it was a complication of diabetes.

But despite all that talk about health and death, I’m still not exactly your health-conscious type of guy. When I was a teener back in Parañaque, a childhood friend of mine had a nonagenarian grandmother who smoked several sticks of Philip Morris daily. She’s been like that since her younger years, according to my friend. An office mate has a family member who is health conscious, a semi-vegetarian who recently suffered a stroke. Another childhood friend who was athletic and well-built died a few years ago while playing basketball. Just last month, the vocalist of my former band (yes, I was once a rock star) died in his sleep. I’m even older than him. Too bad he wasn’t able to reach his 40s.

I’m sure you’ve heard so many uncanny stories like the ones mentioned above.

We could even go to the next level beyond health. There are many people who are so conscious about safety and well-being, but not me. I remember a wealthy neighbor of my auntie, also in Parañaque. That neighbor has a huge house with very high walls that are fenced up with barbed wires. Even the gates are electrified. The house had several security guards. I used to think that they are willingly ready to wage war anytime against the whole neighborhood. But one day, the neighborhood received shocking news that the house was robbed. When the police arrived at the scene, they found all the guards and maids tied up like Christmas presents; luckily for them, they weren’t butchered (looking back, I was wondering what kind of treasure that supposedly heavily secured house had to hide). Aside from security issues are safety concerns. For example, there are instances of pedestrians who had been very mindful and extra careful in crossing roads but still end up as victims of hit-and-runs.

This is not to say that I’m promoting recklessness, or that I am reckless myself, but it is what it is: if shit’s gonna pounce at you, no matter how careful you’ve been, there’s nothing much you can do. That is why I no longer mind my wife who never tires in warning me to always look behind my back. She is always worried that one day, a hired goon by either Eugenio Ynión Jr. or his insane brother Rommel might successfully put a bullet in my head. But worrying will only stress me out. There’s a saying in Tagálog for this: “Capág horas mo na, horas mo na“. If your time’s up, then that’s it. I’d rather have fate or providence dictate the course of whatever actions or decisions I choose. Let those two be my own Chevy and Mustang. Que será, será.

I don’t wish to end this blogpost on a morbid note. Mayor Calex told me that he plans to launch his biography next year. If possible, this coming March. And he wants to coincide it with the launching of his revitalized vintage cars.

Our time has come. This will be it.