The Punisher is my favorite character from Stan Lee’s astonishing Marvel Comics universe. I remember those days when I scrimped on my allowance, saving every coin to buy copies of various Punisher titles that used to come out per month.

Those were the 90s, a time when physical simplicity and digital complexity were at the crossroads. During those happy days, when sociability was not yet confined to an android, Stan Lee maintained a column in each Marvel comic book. Titled “Stan’s Soapbox”, he gave us fans a glimpse of the ins and outs of Marvel Comics’ exciting plans for the future as well as other happenings in connection to Marvel’s creative crew that had a cult following of their own (the tandem of Chuck Dixon and John Romita Jr. was my favorite). At a time when social media was still a fevered dream, Stan Lee and his happy caboodle were our go-to-guys regarding all sorts of geekery. But from time to time, Stan Lee used his column as a platform to air his views about almost anything, some of which were controversial, nevertheless just.

Even through print, he engaged fans as if he was your friendly neighborhood grandfather that you could tell your problems to. Whenever I read him, I tried to imagine the kind of voice that he might had; years later, when he started appearing in cameos for various Marvel films, I was astonished to find out that the way I had imagined his voice would be came out quite accurately! And his grandfatherly voice as well as his gentle features perfectly fit the way he wrote: jolly and lively. There was many a time when I looked forward to his soapbox with as much excitement as I had towards the pulse-pounding storylines contained in The Punisher titles. His column also introduced me to the wider Marvel Universe, beyond the blood and bullets of The Punisher. 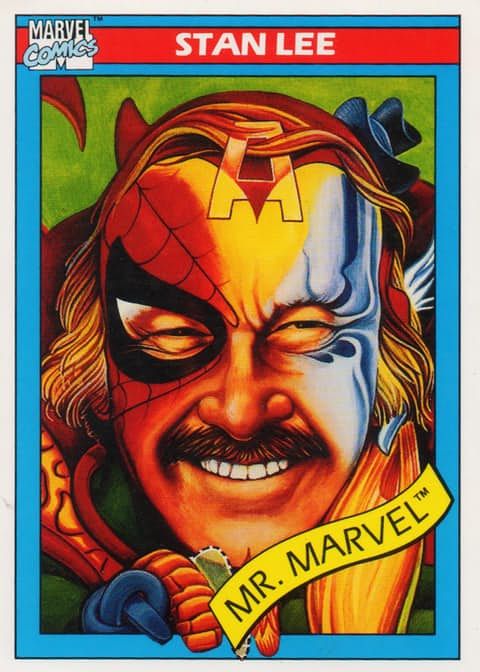 Marvel trading card released in 1990 by Impel Marketing, Inc. This particular card was my first introduction to who Stan Lee was.

And do I really have to describe his language, his style of writing? The adjectives preceding some of Marvel’s iconic titles (AMAZING Spider-Man, UNCANNY X-Men, INCREDIBLE Hulk) may well be regarded as apposite laurels to his astounding talent and infinite well of imagination. His column, even though meant simply to inform readers about the goings-on in Marvel’s “House of Ideas”, is written in beautifully sculpted language. It is always an exalting experience for me whenever I read it. For a non-native English speaker, it was a challenge skimming through Stan Lee’s vast array of colorful vocabulary. It was simply impossible not to have a dictionary at hand when tackling his soapbox. But it was to my advantage: little did I know that it was to be my “training ground” as I was able to ace my English composition and grammar lessons at school. 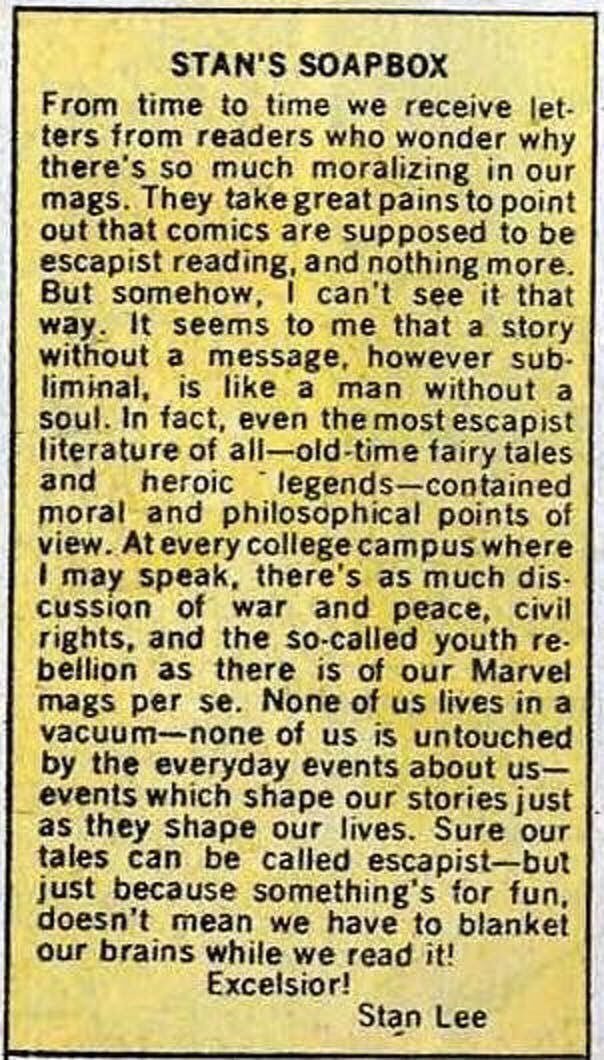 Whenever Stan Lee wrote, he soared not like his caped heroes but like Shakespeare and Byron exposed to (red alert: Marvel jargon up ahead!) Terrigen Mists.

If you opine that my English is noteworthy, don’t. I am not an exceptional scribbler; whatever worth that I have as a writer, I simply got from years of reading Stan Lee. And yes, he was a major factor as to why I have come to love reading and writing. The best part of this all is that Stan Lee and Marvel Comics inadvertently led me to the world of English Literature.

I am so devastated at his passing. I’ve always thought he’d reach up to a hundred. He will be dearly missed.

Excelsior to infinity and beyond! ‘Nuff said…