Home » Catolicismo » A faded inscription at the Nagcarlán Underground Cemetery

While Filipinos troop to the provinces to visit their beloved dead on All Saints’ Day, many still believe that the proper date of visiting them is on the following day, on All Souls Day. As the name connotes, All Saints’ Day is reserved for the Saints; All Souls Day should be consigned to our dearly departed.

In a video interview, however, Fr. Jojo Zerrudo (parish priest at the Most Holy Redeemer Church in Quezon City and current Catechetical Director and Exorcist of the Roman Catholic Diocese of Cubáo) explains that during the Spanish times, Filipinos attended Mass in the morning of All Saints’ Day to honor the Holiest Souls of the Church. Only after lunch do they go to the cemetery to visit their beloved dead to offer candles, flowers, and prayers. There they stay for an overnight vigil, until All Souls’ Day.

Throughout the decades, the number of those who have been interred in cemeteries has significantly grown. Public cemeteries seemed no longer big enough to accommodate “newcomers”, prompting families to excavate old coffins and combine recently deceased loved ones with the bones or ashes of those who went ahead of them. Some enterprising businessmen see this plight as an opportunity to earn more money by establishing private cemeteries for those who can afford spacious and stylish graves. 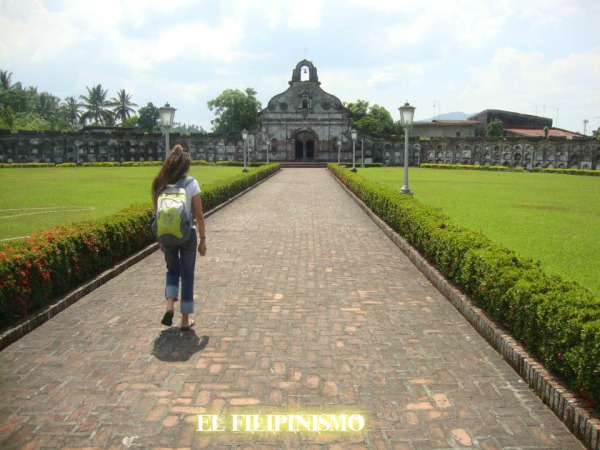 My wife walking towards the chapel. Below it is the underground cemetery.

Perhaps one cemetery in Filipinas that will not get overcrowded with corpses is the underground cemetery of Nagcarlán, La Laguna because it has been converted into a national historical landmark and museum on 1 August 1973 by former President Ferdinand Marcos (its official name today is the Nagcarlán Underground Cemetery Historical Landmark). It is the first and only one of its kind in the country as it was built in an arabesque style that, according to critics, is something very unique, aside from the fact that its crypt is 15 feet below the ground. The small chapel above it is used for funeral rites and is enclosed in a garden that stands above a hill and attached to the interior walls of the cemetery. The interiors of the chapel and crypt are adorned with elaborately designed white and blue tiles which look very similar to those at the nearby town church (Iglesia de San Bartolomé Apóstol), leading to the suspicion that the long-held belief of an underground tunnel beneath the town connects both church and cemetery. The crypt contains more or less 36 niches and tombstones (whose inscriptions are Spanish, Tagalog, and some in English). 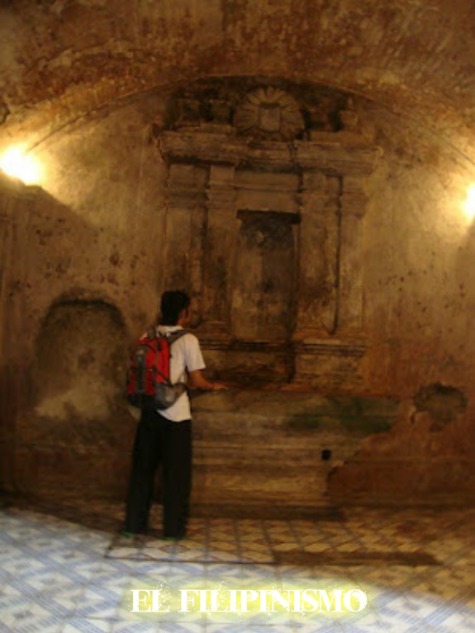 Me at the crypt below the ground. Notice the white and blue tiles on the floor, said to be very expensive during the time of the cemetery’s construction. If memory serves right, they’re called Mazurka tiles.

While many stories have been written about this underground cemetery through the years, there’s one peculiar part of it that many people have failed to notice. Two flights down from the chapel is the small crypt —the actual underground cemetery— where it is perpetually dank and dark. On a wall right above the stairs is a faded Spanish inscription dedicated to the faithful departed… 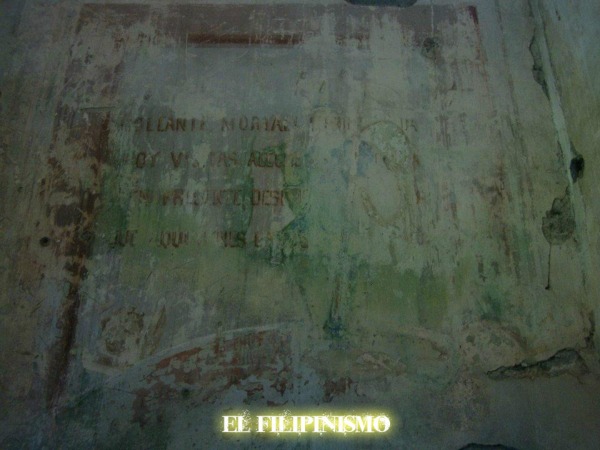 (Translation:
Go forth, Mortal man, full of life
Today you visit happily this shelter,
But after you have gone out,
Remember, you have a resting place here,
Prepared for you.)

The inscription is in danger of disappearing forever if not restored by experts. Although flash photography is prohibited to protect the old markings and paint on the walls and tombstones, it is not enough to conserve what needed to be conserved as the place is not safe from humidity.

The crypt of this underground cemetery is historic because it was a secret meeting place for the Katipuneros in the 1890s. It was here where the historic Pact of Biac-na-Bató was planned by Pedro Paterno and General Severino Taiño in 1897.

Since its construction in 1845 by Fr. Vicente Velloc, the same Franciscan friar who supervised the town church’s reconstruction and restoration on that same year (that should explain the similar tiles),  Nagcarlán’s underground cemetery has been used as a public cemetery until 1981. It has since become a tourist spot.

The forested municipality of Nagcarlán is approximately two hours away from Metro Manila, from Alabang, Muntinlupà City by car (or 99 kilometers south of Manila via the City of San Pablo, La Laguna). The historic site of the municipality is open to the public from Tuesday to Sunday, 8:00 AM to 4:00 PM. Admission is free. 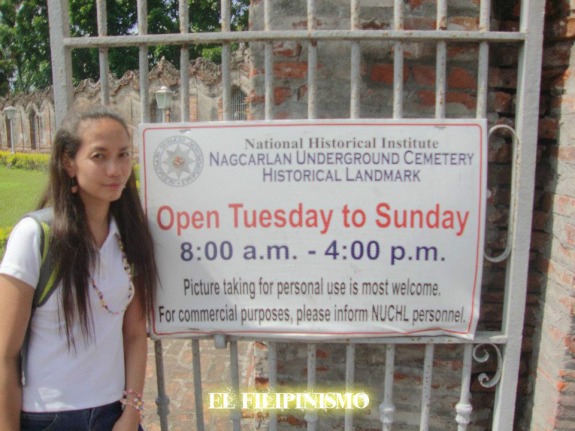 And no, it is not haunted.

3 thoughts on “A faded inscription at the Nagcarlán Underground Cemetery”